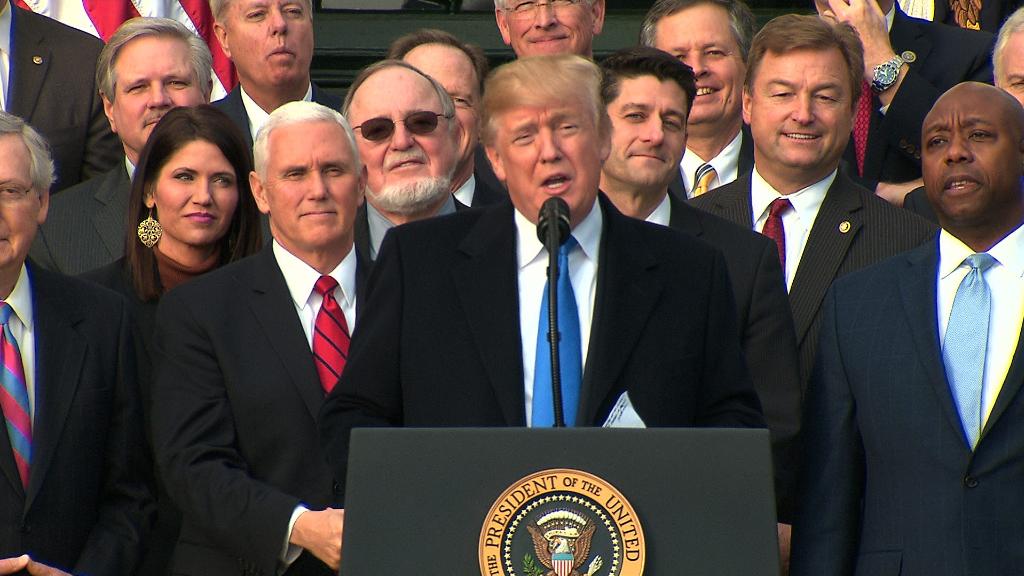 It’s official. Congress has ushered through the first major tax overhaul since Ronald Reagan was president.

The measure, which now awaits President Trump’s signature, is about to shake up life for millions of Americans. It will redistribute the country’s wealth. It could sway decisions about whether to buy a home, or where to send kids to school. It could even affect when unhappy couples decide to get a divorce.

As the bill becomes law, here are 34 things you need to know.

Reagan signed major legislation for corporations and individuals in 1986. Since then, serious tax reform has eluded Republicans, though they repeatedly called for it as the tax code became longer and more arcane.

2. Changes have been made to both individual and corporate tax rates.

Individual provisions in the new legislation technically expire by the end of 2025, though some people expect that a future Congress won’t actually let them lapse. Most of the corporate provisions are permanent.

3. Tax reform will increase deficits by $1.46 trillion over the next decade.

That’s the net number that’s been crunched by the nonpartisan Joint Committee on Taxation. The future law’s contribution to the debt will likely be even higher if individual tax cuts are re-upped in eight years.

4. There are still seven tax brackets for individuals, but the rates have changed.

5. The standard deduction has essentially been doubled.

6. The personal exemption is gone.

Previously, you could claim a $4,050 personal exemption for yourself, your spouse and each of your dependents, which lowered your taxable income. No longer. For some families, the elimination of the personal exemption will reduce or negate the tax relief they get from other parts of the reform package.

7. The state and local tax deduction now has a cap.

The state and local tax deduction, or SALT, remains in place for those who itemize their taxes — but now there’s a $10,000 cap. Previously, filers could deduct an unlimited amount for state and local property taxes, plus income or sales taxes.

8. The child tax credit has been expanded.

Taxpayers may now claim a $500 temporary credit for non-child dependents. This can apply to a number of people adults support, such as children over age 17, elderly parents or adult children with a disability.

10. Fewer people will have to deal with the alternative minimum tax.

The alternative minimum tax, a parallel tax system that ensures people who receive a lot of tax breaks still pay some federal income taxes, remains in place for individuals. But fewer people will have to worry about calculating their tax liability under the AMT moving forward. The exemption has been raised to $70,300 for singles, and to $109,400 for married couples.

11. And the mortgage interest deduction has been lowered.

Current homeowners are in the clear. But from now on, anyone buying a new home will only be able to deduct the first $750,000 of their mortgage debt. That’s down from $1 million. This is likely to affect people looking for homes in more expensive coastal regions.

Americans won’t need to worry about these changes when they start filing their 2017 tax returns in about a month. The new laws will first be applied to 2018 taxes.

13. By the way, you can still deduct student loan interest.

The deduction for student loan interest, which is up to $2,500 per year, is safe.

14. You can still deduct medical expenses.

15. If you’re a teacher, you can still deduct classroom supplies.

The deduction for teachers who spend their own money on school supplies was left alone. Educators can continue to deduct up to $250 to offset what they spend on classroom materials.

Drivers of plug-in electric vehicles can still claim a credit of up to $7,500. Just as before, the full amount is good only on the first 200,000 electric cars sold by each automaker. GM, Nissan and Tesla are expected to reach that number some time next year.

17. Home sellers who turn a profit keep their tax break.

Homeowners who sell their house for a gain will still be able to exclude up to $500,000 (or $250,000 for single filers) from capital gains, so long as they’re selling their primary home and have lived there for two of the past five years.

In the past, funds invested in 529 savings accounts wasn’t taxed — but it could only be used for college expenses. Now, up to $10,000 can be distributed annually to cover the cost of sending a child to a “public, private or religious elementary or secondary school.” This change is a win for Education Secretary Betsy DeVos.

Graduate students still won’t have to pay income taxes on the tuition waiver they get from their schools. Such waivers are typically awarded to teaching and research assistants.

20. But say goodbye to the tax deduction for alimony payments.

Alimony payments, which are codified in divorce agreements and go to the ex-spouse who earns less money, are no longer deductible for the person who writes the checks. This provision will apply to couples who sign divorce or separation paperwork after December 31, 2018.

21. The deduction for moving expenses is also gone …

There may be some exceptions for members of the military. But most people will no longer be able to deduct the cost of their U-Haul when they move for work.

22. As is the tax preparation deduction …

Before tax reform passed, people could deduct the cost of having their taxes prepared by a professional, or the money they spent on tax prep software. That break has been eliminated.

Losses sustained due to a fire, storm, shipwreck or theft that aren’t covered by insurance used to be deductible, assuming they exceeded 10% of adjusted gross income. But now through 2025, people can only claim that deduction if they’ve been affected by an official national disaster. That would make someone whose house was destroyed by a California wildfire potentially eligible for some relief, while disqualifying the victim of a random house fire.

24. … And the reimbursement for bicycle commuters.

The tax code used to let you to knock off up to $20 from your income per month for the costs of bicycle commuting to work, assuming you weren’t enrolled in a commuter benefit program. That’s gone.

25. Almost everyone is now exempt from the estate tax.

Before tax reform, few estates were subject to the estate tax, which applies to the transfer of property after someone dies. Now, even fewer people have to deal with it. The amount of money exempt from the tax — previously set at $5.49 million for individuals, and at $10.98 million for married couples — has been doubled.

26. Adjustments for inflation will be slower.

The new legislation uses “chained CPI” to measure inflation. It’s a slower measure than what was used before. Over time, that will raise more money for the federal government, but deductions, credits and exemptions will be worth less.

27. Oh, and the individual mandate on health insurance has been scrapped.

Republicans failed to repeal Obamacare earlier this year, but they managed to get rid of one of the health law’s key provisions with tax reform. The elimination of the individual mandate, which penalizes people who do not have health care, goes into effect in 2019. The Congressional Budget Office has predicted that as a result, 13 million fewer people will have insurance coverage by 2027, and premiums will go up by about 10% most years.

28. You won’t be able to file your tax return on a postcard.

Trump said H&R Block would go out of business after tax reform because filing taxes would become so simple. Not quite. While doubling the standard deduction will ease the process for some individuals, there’s still a web of deductions and credits to work through. And for small businesses, filing could become even more complicated.

29. The corporate tax rate is coming down.

The corporate tax rate has been cut from 35% to 21% starting next year. The alternative minimum tax for corporations has been thrown out altogether. Earnings are expected to go up as a result.

30. Pass-through entities will also get a break.

The tax burden by owners, partners and shareholders of S-corporations, LLCs and partnerships — who pay their share of the business’ taxes through their individual tax returns — has been lowered via a 20% deduction. The legislation includes a rule to ensure owners don’t game the system, but tax experts remain concerned about abuse of this provision.

31. Not all CEOs think they’ll use their savings to create jobs, though.

32. Plus, the way multinational corporations are taxed is about to change.

The U.S. is switching to a territorial system of taxation, which means companies won’t owe federal taxes on income they make offshore. To help the transition, companies will be required to pay a one-time, low tax rate on their existing overseas profits — 15.5% on cash assets and 8% on non-cash assets, like equipment in which profits were invested.

33. By the way, there’s a provision to rein in executive pay at nonprofits.

The legislation includes a new 21% excise tax on nonprofit employers for salaries they pay out above $1 million. That may mean some well-paid executives at nonprofits take a pay cut.

34. Businesses won’t be able to write off sexual harassment settlements.

New Jersey Democratic Senator Bob Menendez’s amendment born of the #MeToo moment made it all the way through. Companies can no longer deduct any settlements, payouts or attorney’s fees related to sexual harassment if the payments are subject to non-disclosure agreements.