Patrick Rooney, associate dean for academic affairs and research at Indiana University Lilly Family School of Philanthropy, weighs in on why Americans who have lost incentives to give to charity through the new tax law may donate less from now on. The answers are based partly on questions he fielded from fundraising consultant and blogger Michael Rosen.

1. What will affect giving the most?

The biggest change is indirect: By roughly doubling the standard deduction, the tax code changes make giving to charity less of a bargain.

Only Americans who itemize their tax returns are eligible for the charitable deduction, a dollar-for-dollar reduction in their taxable income that lowers what they owe the IRS.

Researchers like me believe that the share of taxpayers who can take advantage of this tax break will plummet to about 5 percent from roughly 30 percent.

That will make a big difference because most people who can take advantage of this tax break do. More than 55 percent of U.S. households said they made charitable gifts in 2014. But for those who itemize, my colleagues and I found that 82.4 reported having taken advantage of the charitable deduction.

Stacy Palmer, an editor with The Chronicle of Philanthropy, explains in a PBS NewsHour interview why nonprofits fear that the new tax law will depress charitable giving.

This hypothetical example shows how this could play out: Pharmacist “Josephine Doe” paid a 25 percent marginal tax rate on her US$100,000 income as a joint filer (under the old tax law). Because her family itemized, her $100 annual donation to a local animal shelter only cost $75, while Uncle Sam basically paid the rest through a tax break.

Under the new law, her family will take the standard deduction, making her charitable contribution no longer tax deductible. Giving $100 will cost $100.

We anticipate that the tax code changes will lead Americans and U.S. companies to donate roughly $21 billion less per year to charity based on changes in the tax incentives.

2. Will economic growth make up the difference?

Economic growth is unambiguously good for philanthropy because it tends to lead to more money in people’s pockets. Economists, including John List at the University of Chicago, have found that people give more when they have more money to give.

But it’s hard to estimate how the changes in the tax law will affect growth, and we know that the changes will affect households differently based on their sources of income, number of children, the size of their mortgage and how high their state and local taxes are.

The University of Pennsylvania economists responsible for what’s known as the Penn Wharton model and others forecast that the new law will boost growth by relatively small amounts – as little as 0.1 percentage point – per year over the next decade, following a slightly larger boost in 2018.

In January, after mulling the tax law’s likely ramifications, the International Monetary Fund raised its 2018 forecast for U.S. growth to 2.7 percent rate from a prior 2.3 projection.

Given the uncertainty about the impact of the new tax law on growth and the uneven effects anticipated, my colleagues and I have not factored a growth dividend from the tax law into our expectations.

3. Won’t taxpayers give some of the money they save on taxes to charity?

Typically, itemizing donors give about 3 percent of their income to charity, and, as I noted earlier, people usually give more when they have more. But the tax changes’ effects will vary widely.

About 80 percent of households will initially get a tax cut, while 5 percent will face a tax increase, according to the Tax Policy Center. The rest will see their lot unchanged.

But since many of the tax code’s changes are temporary, even fewer Americans will probably be paying a smaller federal income tax bill than they would have without the new law by 2027.

It’s a different story for companies, which will benefit tremendously as their top marginal rate declines from 35 percent to 21 percent.

Businesses, like people, give for many reasons, including tax incentives, so there’s no reason to expect corporate giving to decline in proportion with this tax cut.

Indeed, some corporations may actually make a point of donating more. However, based on past patterns, I expect corporate giving to decline by $1 billion a year in response to the tax rate cuts – not adjusting for possible growth.

4. How will taxpayers react?

Tax policies may not affect how some people give at all – especially extreme altruists or misers. But the new law will probably affect most typical donors.

Seeing what happens may take years, however.

Because Congress passed the law in December, some Americans front-loaded their giving for 2018 and beyond. They wanted to itemize their deductions in 2017 for the next year or more if they expected to lose their tax break.

That’s what happened in the mid-1980s, the last time that Congress passed a sweeping tax package. Anticipating cuts, some households and businesses gave more to charity than they usually did beforehand.

Giving by the rich spiked, then declined once those changes took effect.

There’s another sign that giving is bunching up: a spike in the number of donor-advised funds, privately managed accounts that operate in many ways like personal foundations. Itemizers may deduct what they put in these accounts from their taxable income right away, even if they don’t give it to a charity for years.

Taxpayers who otherwise won’t be able to itemize can do so by stowing, say, the money they plan to give away over the next few years in one of these accounts in a single year and allocating those funds over the next several years to their favorite nonprofits.

Indeed, Schwab Charitable, a leading provider of this philanthropic service, says that the number of accounts it opened spiked 91 percent in the second half of 2017 due to stock gains and tax concerns.

Employees of some of these financial institutions told me that they were working 20-hour days in the last two weeks of December to keep up with new clients who wanted to open donor-advised fund accounts before the tax rules changed to front-load some of their giving. 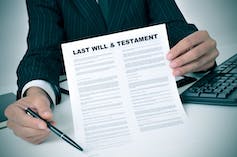 Only the very richest Americans leave behind estates that are subject to an inheritance tax. nito/Shutterstock.com

Finally, the new law changes rules governing the estate tax, a levy on inheritance, by doubling exemption levels. For the next decade, estates left by deceased individuals worth $11 million or less will pay no taxes for the next decade, along with those left behind by couples who possessed up to $22 million. An unchanged 40 percent marginal rate applies to fortunes that are bigger than than the cutoffs.

The Joint Committee on Taxation, a congressional committee charged with estimating the impact of fiscal legislation, estimates that 1,800 estates will pay the estate tax in 2018, a steep drop from the approximately 5,000 estates it says would have had to pay it without the new tax law. I expect this change to reduce the incentive for wealthy Americans to bequeath money to charity, sparking a roughly $7 billion annual decline in giving through bequests.