President Donald Trump‘s tax policy doubled the number of highly profitable companies that were able to avoid paying any federal taxes in 2018, according to a new report.

Amazon, Netflix, Chevron, Delta Airlines, IBM, General Motors and Eli Lilly were among those who managed to escape taxes for last year, according to the study by the Institute on Taxation and Economic Policy.

‘Instead of paying $16.4 billion in taxes, as the new 21 percent corporate tax rate requires, these companies enjoyed a net corporate tax rebate of $4.3 billion, blowing a $20.7 billion hole in the federal budget last year,’ the report says.

The Washington, D.C. think tank analyzed America’s 560 largest publicly held companies, finding that 60 of them paid nothing in taxes for last year – double the average of roughly 30 companies that got away scot-free each year from 2008-2015.

Republicans in Congress pushed through the tax law signed by Trump in 2017, and its policies favoring the richest Americans and most valuable U.S. companies took effect in 2018.

Scroll down for the full list of companies and rebates 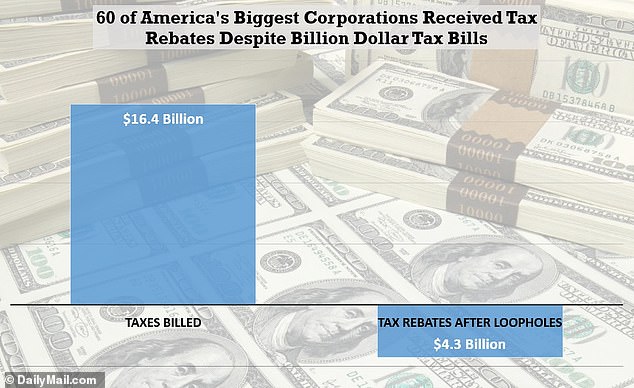 This graph illustrates the amount of money that 60 of America’s largest companies were billed for taxes last year – along with the actual money they ended up getting back instead of having to pay. Source: Institute on Taxation and Economic Policy

The change cut the tax rate from 35 percent to 21 percent and allowed companies to take advantage of deductions, tax credits and rebates. That change alone is projected to save corporations $1.35 trillion over the next decade, according to the Joint Committee on Taxation.

‘We know that there’s this pretty glaring contrast between what the proponents of this tax law promised back in 2017 and what it’s delivering now,’ lead author Matthew Gardner told DailyMail.com.

‘The whole argument was that the reason companies were avoiding taxes is because tax rates are so high,’ he added. ‘What we’re seeing is that isn’t coming to pass.’

Collectively, the 60 companies that avoided all taxes last year managed ‘to zero out their federal income taxes on $79 billion in U.S. pretax income,’ according to the study, which was first reported on by the Center for Public Integrity and NBC News.

For example, the John Deer farm equipment company earned $2.15 billion before taxes, yet owed no U.S. taxes and used deductions and credits to extract $268 million from the federal government.

‘This was a more precipitous decline than in any year of normal economic growth in U.S. history,’ wrote Gardner, a senior fellow for the Institute on Taxation and Economic Policy, in the report.

We know that there’s this pretty glaring contrast between what the proponents of this tax law promised back in 2017 and what it’s delivering now.        -Matthew Gardner, Institute on Taxation and Economic Policy

Trump had said that the corporate tax cut would pay for itself by sparking a business boom that would create more jobs, thus generating growing income tax revenues for the nation.

That reality hasn’t emerged. Instead the nation’s budget deficit is higher than it’s ever been in this nation’s history.

That’s despite Trump’s campaign promise to eliminate the $19.9 trillion national debt in eight years. So far it has ballooned 41.8 percent in the first four months of the 2019 fiscal year (which runs October 1 – September 30.

The Government Accountability Office announced in April that the ‘federal government’s current fiscal path … (is) unsustainable.’

Presidential economic adviser Larry Kudlow has said that ‘economic growth’ has ‘paid for a good chunk’ of the tax cuts, and that the budget’s outlook is ‘not as bad’ as it’s perceived.

This table lists the amount of money that 60 of America’s largest companies were billed for taxes last year – along with the actual money they ended up getting back instead of having to pay. Source: Institute on Taxation and Economic Policy