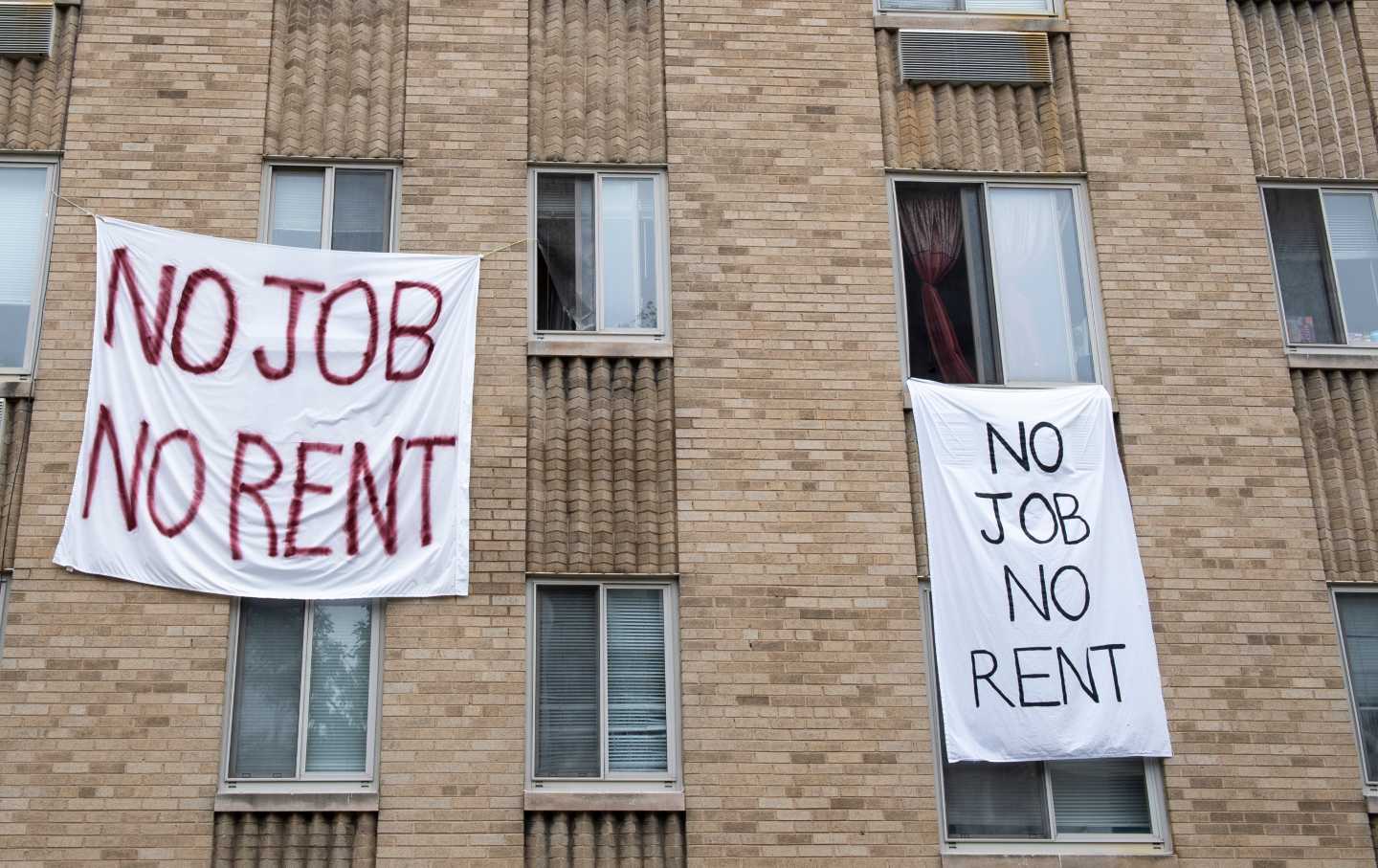 June rent is due this week, and for millions of tenants, the options for relief are running out. After a brief pause, about half of US states are now allowing evictions again. The number of people paying rent with their credit cards has risen sharply, available data suggests, and hundreds of thousands have joined rent strikes since March 2020, according to a national coalition coordinating rent strikes by those who can’t or won’t pay this month.

With no large-scale federal action on housing in sight, and evictions resuming in several more states, including Nebraska, Mississippi, and Rhode Island, this week, whether renters can keep a roof over their heads may literally be up to chance. Some state and local governments are putting federal coronavirus-response dollars toward emergency housing assistance, but with the need outstripping available funding, at least 10 cities in six states are relying on lottery systems to disburse funds. A small fraction of renters who apply get help, while everyone else misses out.

That was the case for John McKarthy, who jumped at the opportunity to enter a lottery for rent assistance provided by the city of Miami last month.

“The thing opened at noon, and by 12:01, my application was submitted,” he told me. The president of his local screen actors’ guild, McKarthy typically earns a living with commercial gigs, but filming has dried up this year. The personal-training business he runs also shut down in March, when the city issued a stay-at-home order. That has left McKarthy struggling to come up with $1,680 this month for the apartment he shares with his 4-year-old son in one of the country’s most expensive metro areas for renters.

After launching on May 4, Miami’s Emergency Rental and Utility Assistance Program will provide up to $1,500 for those who lost their jobs as a result of Covid-19 (among other criteria), a lifeline in an area hard-hit by tourism and service industry layoffs. But the $2 million allocated from federal and state funding won’t be enough to support everyone, so the city is using a computerized lottery to pick which renters get a break. After 50 years of cuts to federal housing funding, rationing affordable housing via lotteries is now normalized, and today only about a quarter of low-income households that qualify for housing assistance ever receive it. But during a pandemic, the stakes of a housing lottery are higher than ever.

Evictions were set to resume in Florida this week as nearly 6,000 renters who entered Miami’s lottery waited to hear whether or not they’d be chosen. At the last second, Governor Rick Scott announced that he would delay them for another month. In the meantime, City of Miami staff are working their way down the list of randomly assigned numbers to check required documentation, which includes legal immigration status, and send payments out directly to landlords and utility providers. A spokesperson said they hoped to be able to assist 1,300 households before the money runs out, but did not comment on whether or how many payments had gone out so far.

The computer assigned McKarthy the number 5,853 out of 5,867, meaning that he is almost certainly out of luck.

“How they decide who gets help and who doesn’t, I don’t really understand the logic to it,” he said. “But I’ve always been someone others can count on, so I just have to hope some of that will come back to me now.”

The lotteries like the one in Miami are the outgrowth of a massive shortfall in resources to address the Covid-19-related economic collapse. The National Low Income Housing Coalition estimates that the United States needs an additional investment of between $76 billion to $100 billion just to keep the lowest-income households stably housed over the next year. The CARES Act provided roughly $2.5 billion to maintain existing public and subsidized housing programs, $4 billion for emergency homelessness funding, and $5 billion in grants that cities and states can choose to use toward emergency housing, but must also rely on for other aspects of Covid-19 response such as small-business assistance.

In that context, dozens of cities have cobbled together rental assistance from a mix of federal, state, and local funding. In almost every instance, the need among low-income renters has overwhelmed resources by several orders of magnitude. Boston, Austin, and Chicago all ran their own lotteries for rent relief; in Chicago, more than 80,000 renters applied for 2,000 available grants. Cities relying on first-come, first-served systems have had equally dramatic results. Last month, for example, the city of Houston exhausted its $15 million rental assistance fund 90 minutes after applications opened.

In Austin, the city’s progressive elected officials are moving to fill the void created at the state level, where the state’s Supreme Court allowed eviction hearings to resume last month. Across four counties in North Texas, at least 1,100 evictions were filed while a statewide moratorium was in effect, according to a news report, and are now working their way through the courts. Travis County, where Austin is located, began hearing eviction cases again this week.

To help its residents, Austin ran a lottery in May, receiving more than 10,000 applications and dispersing $1.2 million in payments to about 1,500 households, according to District 4 Council Member Greg Casar. In the meantime, Austin Mayor Steve Adler extended the city’s eviction moratorium through July 25, and City Council members passed an ordinance giving tenants an additional 60-day grace period to come up with back rent once a landlord begins eviction proceedings. Those protections also give the city more time to scale up rental assistance.

“Whether or not you have housing should absolutely not depend on a lottery,” Casar told me. “Cities are trying to plug holes that the federal government should be addressing. Now, given that lack of action, we basically have to piece something together that we weren’t built to do.”

To stretch dollars as far as possible and avoid paying inflated rents in gentrifying neighborhoods, the city has been asking landlords to accept whichever is lower of two rent values: the amount charged to tenants in their leases or fair-market rent as set by the Department of Housing and Urban Development.

That’s a small step in the direction that some housing activists are urging. They point out that rental assistance, through lotteries or other systems, is overwhelming state and local budgets while leaving some landlords largely unscathed. A recent report by the Action Center on Race and the Economy (ACRE) calls for corporate- and private-equity-backed landlords like Kushner Companies, Blackstone, and Starwood Capital to cancel rent for the duration of the pandemic. The Congressional Joint Committee on Taxation estimates that owners of pass-through businesses will receive $170 billion in tax benefits over the next 10 years in addition to the nearly $50 billion funneled to real estate through the 2017 tax cuts. Last month, The Wall Street Journal reported that investors are “flocking to mega-landlords” that, with plenty of cash on hand, look poised to scoop up distressed assets and expand their businesses as the result of the pandemic.

“We don’t want to set up a system where corporate landlords who are sitting on cash are able to get more cash when they don’t really need it,” said Maurice BP-Weeks, co–executive director of ACRE.

The real-estate lobby has been vocal in its advocacy for a federal solution also favored by many housing nonprofits: a $100 billion rental assistance fund, which was included in the HEROES Act passed by the House of Representatives last month but is expected to fail in the Senate.

While this measure would amount to some of the most expansive federal support ever offered to low-income tenants, it would still be “totally inadequate to the scale of the problem,” said Weeks. That means elected officials at all levels of government should think about solutions that ask that more of the cost of relief be borne by companies able to shoulder it.

Absent those solutions, it’s hard to say what will happen in places like Miami, where the temporary reprieve granted to renters will run out again on July 1. More than 800 evictions have been filed in Miami-Dade County since mid-March, according to Alana Greer, executive director of the legal nonprofit Community Justice Project. Those may well be in violation of the governor’s eviction moratorium, but that will have to be sorted out in the courts. Florida’s harsh eviction laws, under which tenants have no guarantee to a day in court, and the state’s dysfunctional unemployment system, one of the slowest in the nation to process claims, make the situation especially perilous.

Miami resident Mercedes Zamora is waiting to challenge an eviction that violates federal law, according to her attorney at Miami Legal Services. A veteran with three children who has been unable to work her job at the Metrorail since March, Zamora lives in a multifamily building with a mortgage backed by Fannie Mae. Under the CARES Act passed by Congress in March, owners of buildings with federal subsidies or federally backed mortgages are prohibited from filing for eviction for the nonpayment of rent until the end of July, but there is little enforcement.

Support our work with a digital subscription.

Zamora, who suffers from PTSD, said that her landlord served her with a notice after she missed April’s rent, and that she has been unable to contact her to work out an arrangement. Zamora’s downstairs neighbor moved out after the onset of the pandemic, and Zamora suspects the apartment has since been turned into an Airbnb.

“I know she has other buildings, and I know she’s getting money from strangers going in and out of the building,” she said of her landlord. “I’m pretty sure that I’m the one without other options.”