With help from Aaron Lorenzo

Programming announcement: This 10 a.m. version of Morning Tax will end daily publication on July 10 and move to a week-ahead style newsletter that publishes on Monday mornings. For information on how you can continue to receive daily policy content, as well as information for current POLITICO Pro subscribers, please visit our website.

— So, really: What’s going on with the idea of advancing business tax credits in a next coronavirus package?

— Three’s a trend: Another outside projection finds that former Vice President Joe Biden, the presumptive Democratic nominee, is proposing to raise around $4 trillion in new taxes.

— Tax collection check-in: It’s going to get really bad in a lot of states.

Get the free POLITICO news app for the critical updates you need. Breaking news, analysis, videos, and podcasts, right at your fingertips. Download for iOS and Android.

It’s a day for celebrations: Today marks 116 years since the day the Irish author James Joyce met his future wife, Nora Barnacle — which then became the day that Joyce’s “Ulysses” was set and is now celebrated in Dublin and elsewhere. (Also, happy anniversary to my wife! Eight years, huh?)

No better way to party than by sending scoops to your favorite tax newsletter.

NEED SOME CASH: The idea to give companies struggling because of Covid-19 a boost by basically fronting their tax credits — letting them take incentives now that would normally be due over the next several years — has been floating around for awhile now.

But there does seem to be some more heat behind the idea right now: The Washington Post’s Jeff Stein reported over the weekend that some Republicans on the Senate Finance Committee have taken a liking to that kind of plan, which is also supported by some heavyweights among business advocates.

By most accounts, there have yet to be any real in-depth talks about what tax provisions might make it into the next relief package — though the situation looks promising for some sort of expansion of the employee retention credit.

But there are still a fair number of questions about advancing general business credits? Would Democrats go along? One aide said it would be a tough sell for that and any other kind of business incentive, after the fallout from the phase three coronavirus package that gave corporations and pass-throughs more ability to spread around their losses. (One idea that Morning Tax heard: Might Democrats be enticed if renewable energy credits were put up in return?)

Still, Rep. Kevin Brady of Texas, the top Republican on the House Ways and Means Committee, acknowledged that accelerating the use of business credits might be “a tough sell” to Democrats, even as he threw his support behind the idea.

Another question: Do Republicans feel burned about the backlash to the corporate net operating loss and pass-through loss limit provisions as well, and would that make them less likely to want to go to bat for letting companies quickly monetize their business credits? It will all have to play out — and it will be interesting to see what kind of score such an idea gets from the Joint Committee on Taxation, if and when it gets to that point.

GETTING TO BE CONSENSUS HERE: The American Enterprise Institute found that Biden’s tax proposals would raise some $3.8 trillion and would be focused at the top end — echoing the findings of both the Tax Foundation and the Urban-Brookings Tax Policy Center, as Pro Tax’s Brian Faler noted.

Kyle Pomerleau of AEI, asked if anything surprised him about his findings, responded that his organization and the Tax Foundation have rather significant differences in how much Biden’s tax plan would drag down the economy over the long run. (Pomerleau found a 0.2 percent reduction in GDP over the long run, while the Tax Foundation’s projections came in at 1.5 percent.) The Tax Policy Center hasn’t done a dynamic analysis yet, but Pomerleau said “I imagine our results will be more in line with TPC.”

One caveat, though: Biden’s tax plan, in a vacuum, would cut the federal debt, which Pomerleau said would cut out some of its negative impact on the economy. But of course, the former vice president actually wants to spend that revenue, so he wouldn’t get any boost from the lower debt. (How likely it is that Democrats could pass a $4 trillion tax increase in 2021 is a question for another day.)

GOING TO KEEP ON DROPPING: How bad could it get for states?

How about this bad: New research predicts that at least one-fifth of states will see revenues drop by at least 30 percent, as Bloomberg noted. Overall, states will see collections decline by an average of 20 percent, and some of the big losers won’t come as much of a surprise — New York, the state hardest hit by Covid-19, tops the list with revenues expected to fall 40 percent.

But other states crossing the 30 percent threshold might not be what you’d expect — Maine, Hawaii, Massachusetts, California, Georgia, New Jersey, Nevada, North Dakota and Connecticut follow New York in the rankings. (At the bottom of the list: Alaska, South Dakota and Washington, D.C.)

Counterpoint: There have already been lots of blaring headlines about steep revenue drops, including a record 13 percent drop in sales tax collections in Texas in May.

But as The Texas Tribune reports, some cities in the state are doing more than just fine when it comes to bringing in revenue. The trick? Big companies have named those cities the official home of their online stores — and what that means is the city then gets to claim the local tax portion of sales made from all over the state. Case in point: San Marcos — the official home of Best Buy’s online store for Texas — saw its sales tax allocation from the state increase by more than 50 percent in April as shopping from home exploded.

LOOKING FOR THAT REVENUE: Spanish officials are already looking toward overhauling the country’s tax code, once a recovery from the coronavirus is complete, Bloomberg reports — and that means setting their sights on raising more tax dollars out of the rich and corporations. The ruling Socialist party and its left-wing coalition partner, Unidas Podemos, have actually been eyeing a tax revamp since the start of the year, before Covid-19 really hit the country. The options the government is looking at include tax increases for the highest earners, a crack down on tax evasion, a minimum rate on corporations and a financial transactions tax. Spain’s economy minister says those ideas will remain on the backburner to recovering from Covid-19 for now, but there are other issues for the government, too — including an economy dragged down by the virus, and disagreements within both the coalition and parliament more broadly. 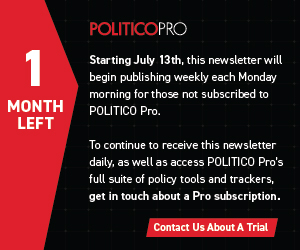 SEE YOU LATER, SESSION: The Colorado legislature brought its 2020 session to a close on Monday. But as The Denver Post reported, the real action on taxes happened over the weekend, when the Democrats who controlled the governor’s mansion and the legislature found an agreement on both tax breaks for the rich and businesses. In the end, Democrats took a sizable chunk out of the plan to scrap tax breaks for the wealthy and corporations, turning a measure that would have raised $278 million next year into one that brings in $96 million. (The original bill had targeted nine separate incentives put into place by the 2017 tax law or the CARES Act, but Democrats reduced that to just a handful.) Gov. Jared Polis is expected to sign the measure, even though there’s no cut in Colorado’s flat income tax — something he’d been pushing for, but that had gained practically no traction in the legislature.

Mary Trump, the president’s niece, is about to publish a book that will examine how she helped The New York Times dig into her uncle’s tax record.

The University of San Marcos in Peru, the longest continuously operating university in the Americas, was established in 1551.